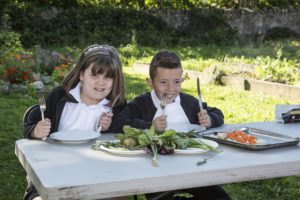 Today, Edinburgh becomes a Veg City, kicking off a city-wide campaign to promote vegetable consumption. The Veg City campaign start coincides with the launch of a new Veg Power advertising campaign, airing for the first time on ITV and STV tonight.

Starting today, schools, community groups, businesses, and families across Edinburgh will join UK-wide activities around the new Veg Power advert. All P4 – 7’s in Edinburgh schools will have a chance to take part in fun veg-themed activities over the course of the next two months, thanks to support from Veg Power, Mash Direct and City of Edinburgh Council.

Local businesses will also be invited to join the veg campaign by displaying Veg Power posters in their windows and by making pledges for how they will make veg an easier and more attractive option to their customers.

This new campaign will be run by members of the Edible Edinburgh partnership, including the City of Edinburgh Council, NHS Lothian, Scotland Food & Drink, Nourish Scotland, as well as local businesses and community groups. Edinburgh is the third national capital to join the UK-wide network of Veg Cities, alongside Cardiff and London, and third Scottish city, following Glasgow and Aberdeen. 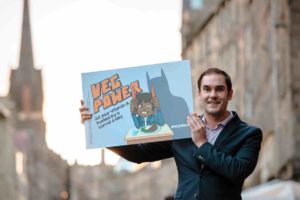 EDINBURGH, UK – January 2017: Edinburgh City Council leader Adam McVey has joined forces with the Peas Please initiative to launch a new Veg Ad Fund to tempt us into eating our vegetables. The fund will allow vegetables to compete with the marketing spend of branded chocolates, fast food outlets and soft-drink firms. Peas Please is marking the launch of the campaign by announcing the winner of its vegetable ad competition with the winning advert displayed in over 5,000 locations nationwide, including projections onto Edinburgh’s City Chambers and Cardiff City Hall, in Co-Op stores nationwide, park notice boards across Glasgow, advertisement spaces in Dundee City Centre, shops in the Outer Herbrides, and many more local communities and thousands of primary and secondary school canteens across the UK. Pictured Adam McVey with the winning advert. (Photograph: MAVERICK PHOTO AGENCY)

Only 15% of Scottish children and young teens eat the recommended 5 portions of fruit and veg a day. Adults are doing a little better, but the 24% managing 5-a-day are still a small minority. Diets that are low in vegetables are associated with higher risk for many chronic diseases, including type 2 diabetes, cardiovascular disease, certain cancers, and coronary heart disease.

Councillor Adam McVey, leader of the City of Edinburgh Council, said “We all know that a nutritious diet, including plenty of fruit and vegetables, is essential for a good start in life. We are getting involved with the Veg Power and Veg Cities campaigns as they aim to inspire kids, support parents and encourage everyone to enjoy more veg. Children learn to like new foods through experience, so by helping them discover how delicious and nutritious veg can be as kids, we can establish good eating habits for life.”

Iain Stewart, Executive Director of Edinburgh Community Food and member of Edible Edinburgh, said: “With our aim to get people into healthy food, and healthy food into people, we are delighted to be involved with the Veg Power campaign. We will be promoting vegetables with special offers on vegetables at our hospital fruit and veg stalls, and will be focusing on vegetables in our families cooking and nutrition groups to increase the consumption of vegetables at home.”

Fiona Richmond, Head of Regional Food at Scotland Food & Drink, said: “This is a very welcome campaign that aims to get the nation tucking into more veg, and it’s great to see our capital city leading the way. We also hope that it will shine a light on the vegetables that are produced in Scotland. As an organisation, we want to encourage the sourcing and consumption of home-grown, seasonal produce such as carrots and kale, and fittingly, as we celebrate Burns Night today, our much-loved ‘neeps and tatties’.”

The Veg Power and ITV advert will be launched exclusively during the advertising breaks of Coronation Street from 7.30pm on STV on Friday 25th January and The Voice from 8pm on STV on Saturday 26th January.