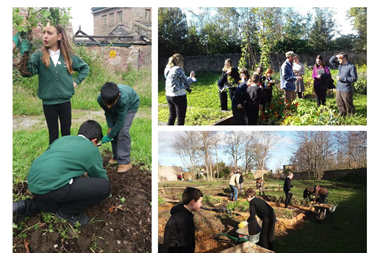 Transition Edinburgh South are thrilled to be nominated for the Climate Coalition’s Green Heart Hero Award for Gracemount Walled Garden. The Garden has been nominated under the most inspirational community project category. A  booklet has been produced that highlights our work  at the Walled Garden over the past 5 years.

Green Hearts believe in the possibility of a cleaner, safer future;  the ambition and efforts of projects big and small to transform communities everywhere; and the force of millions who are protecting the things they love. The Green Heart Hero Awards celebrate these extraordinary endeavours and give everyone involved a huge round of applause for all they are doing to create a cleaner, more secure future for our communities and beyond. At Gracemount we practice a no dig system of organic horticulture.

The award is to be presented by Clive Anderson, TV and Radio presenter, and Kay Burley, Sky TV news presenter, at the House of Commons in London on 11th March.

You can see details of the winners from 2018 here.

Fingers crossed! And a huge thank you to all who nominated Edinburgh Transition South and Gracemount Walled Garden for this award.

If you love veg and are interested in engaging with people to increase their veg consumption sustainably, then why not become a Veg Advocate with #PeasPlease? Find out how by visiting our website https://www.edible-edinburgh.org/call-for-veg-advocates/ @nourishscotland